A photo essay about Great Boston Kite Festival: How an event that started more than 50 years ago brought the entire city together for a shared experience around the craft of making and flying kites.

Kites are objects that are designed, crafted and used by people all over the world. Kites are a reflection of locally available materials, socially shared knowledge and local conditions of landscape, wind and space.

For more than 50 years, people of all ages have gathered in Franklin Park, Boston’s largest shared green space, on a Saturday in May to fly kites together. The first “Great Boston Kite Festival” was held on 17 May 1969 on the golf course at Franklin Park. Led by artist Clara Wainwright, a group of artists and designers calling themselves “The Committee for the Better Use of Air” worked to create opportunities for as many people as possible to engage in this shared experience through exhibitions, workshops and contests centered around kite making and kite flying. 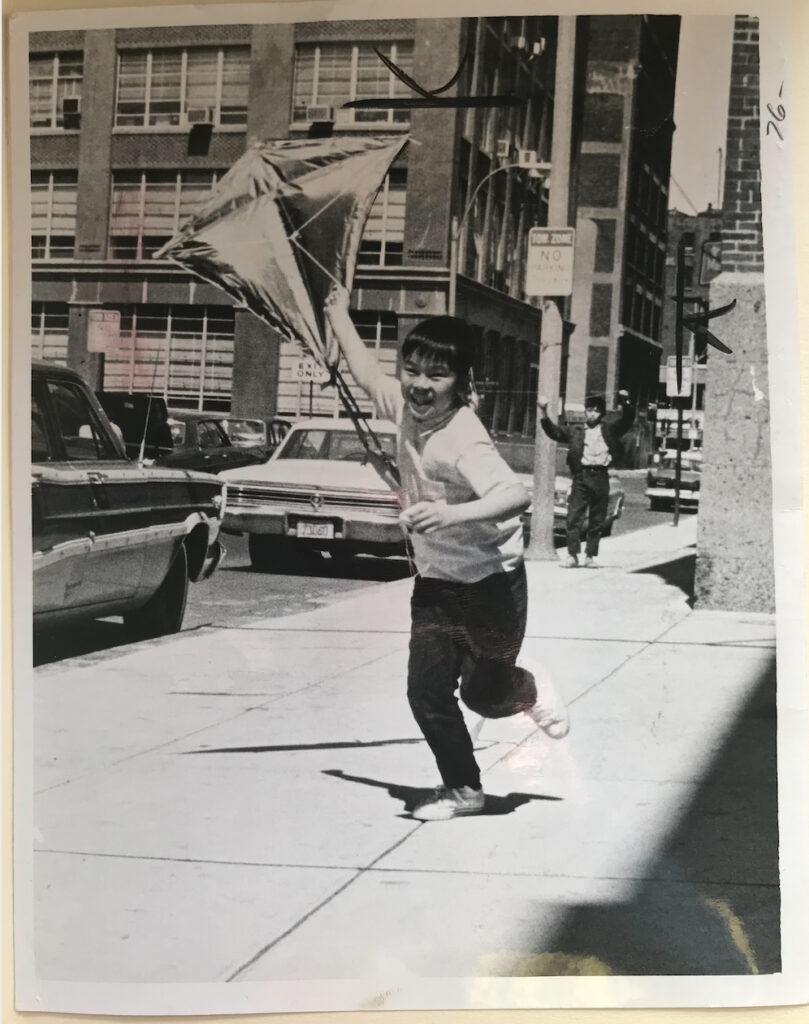 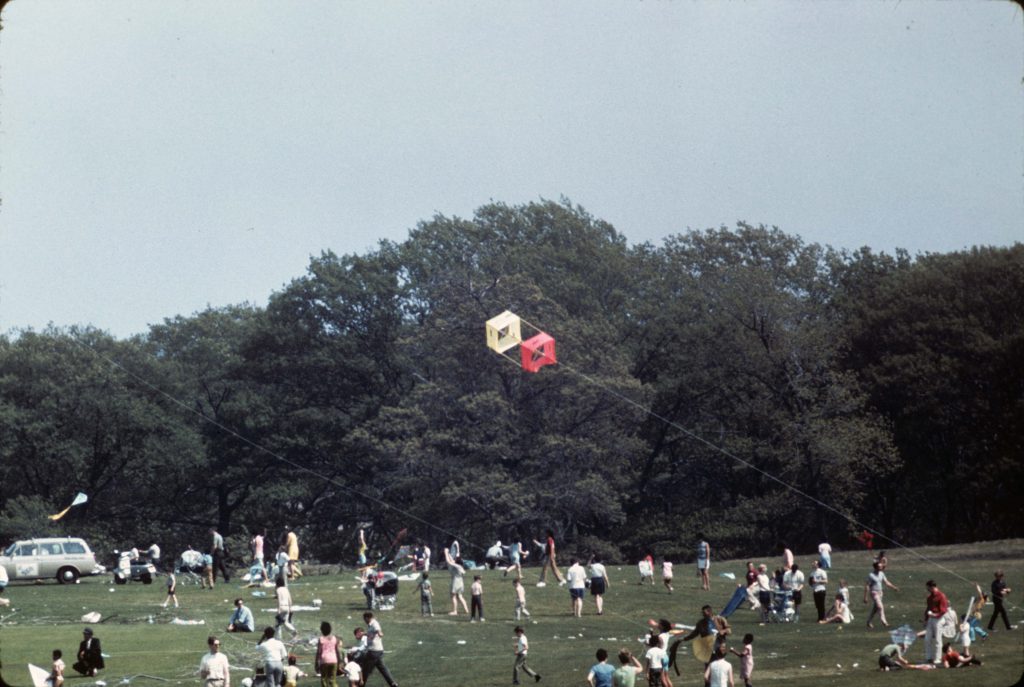 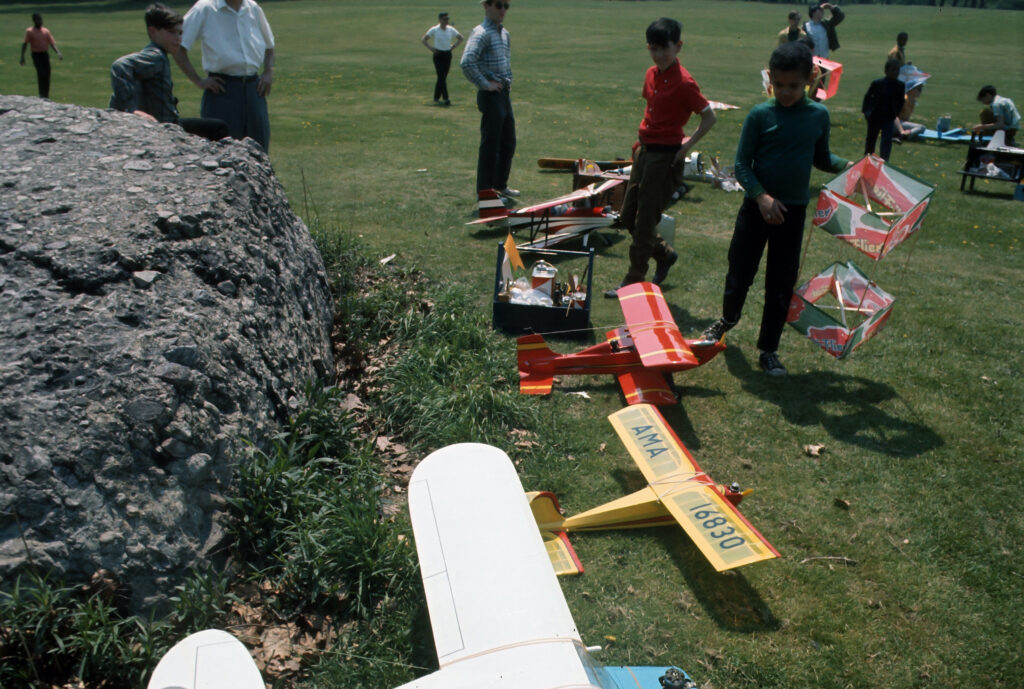 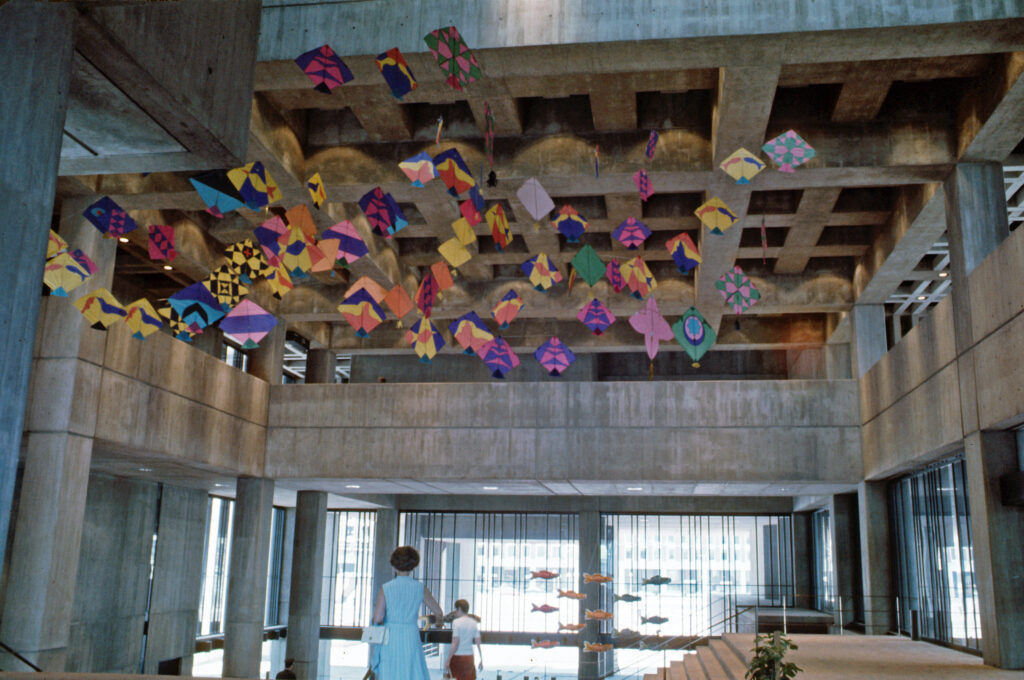 In the weeks leading up to the festival, organizers conducted free kite-making workshops at 15 different Boston Parks Department buildings and community centers across the city to give as many children as possible the materials and skills to make their very own kites in preparation for the big day. The newspaper caption that was published alongside this uncredited 28 April 1969 press photo (found on eBay) identified Steve Ng, age 8, leaving one such kite clinic at the Maryknoll Sisters Center in Boston’s Chinatown.

The “Committee for the Better Use of Air” engaged many different stakeholders in the creation of this festival‒kite flyers, sky divers, radio-controlled model airplane enthusiasts, scientists, artists, professional athletes, sculptors, museum curators, architects, local celebrities, journalists, City Hall, park neighbors, high school marching bands, a kazoo band, food vendors and children and families from all over Boston came together to make the Great Boston Kite Festival something fun and exciting for everyone. Image courtesy of the Michael Sand Estate.

An exhibition of kites belonging to designers Charles and Ray Eames was installed in the atrium of the brand-new Boston City Hall, which opened in February 1969, just three months before the inaugural Great Boston Kite Festival. Image courtesy of the Michael Sand Estate.

I am a passionate kite flier and I am fascinated by the history of kite flying in the Boston area. I first learned about the Great Boston Kite Festival from a friend who remembered attending the fest in the early 1970s with a handmade kite with the word “impeach” on it. I’ve tried to learn as much as I can about this event through interviews and sifting through old newspaper articles and archives to try to understand more and the social and political context in which it was founded.

One of the things I love about kites is that they can be made out of free materials and flown in a wide variety of settings. Their potential as a form of creative expression and connection to people and the environment feels limitless. Of course, kite fliers don’t need to wait for a large festival to transform public space into a spectacular aerial craft exhibition! In fact, kite flying is an ideal activity for times when we have to remain physically distanced from one another. I hope that these images inspire you to make a kite and go fly it in a park near you! 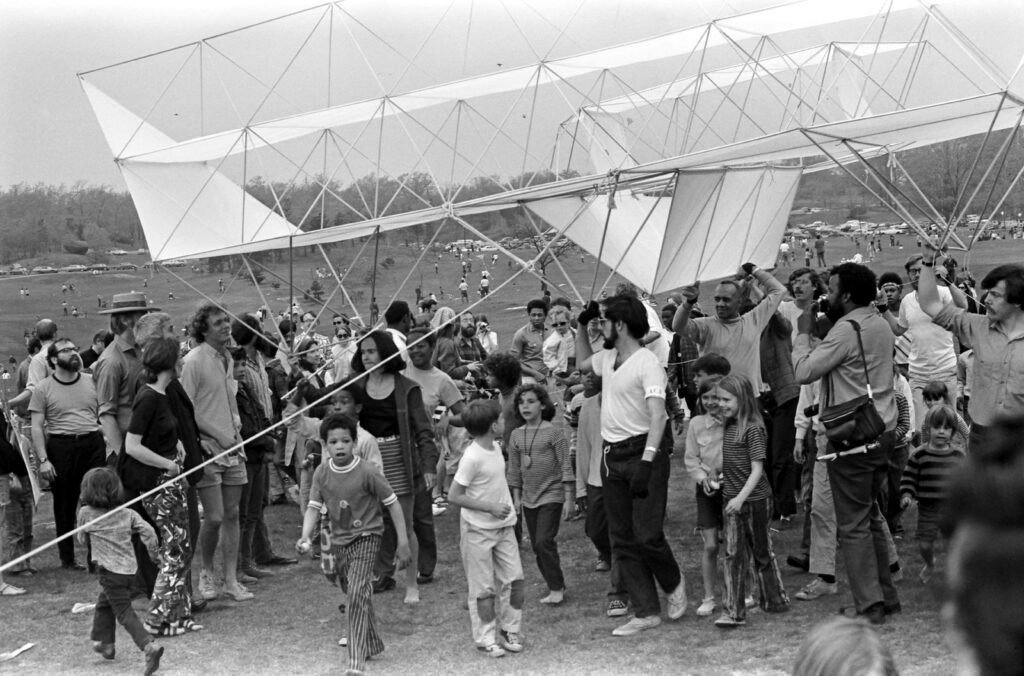 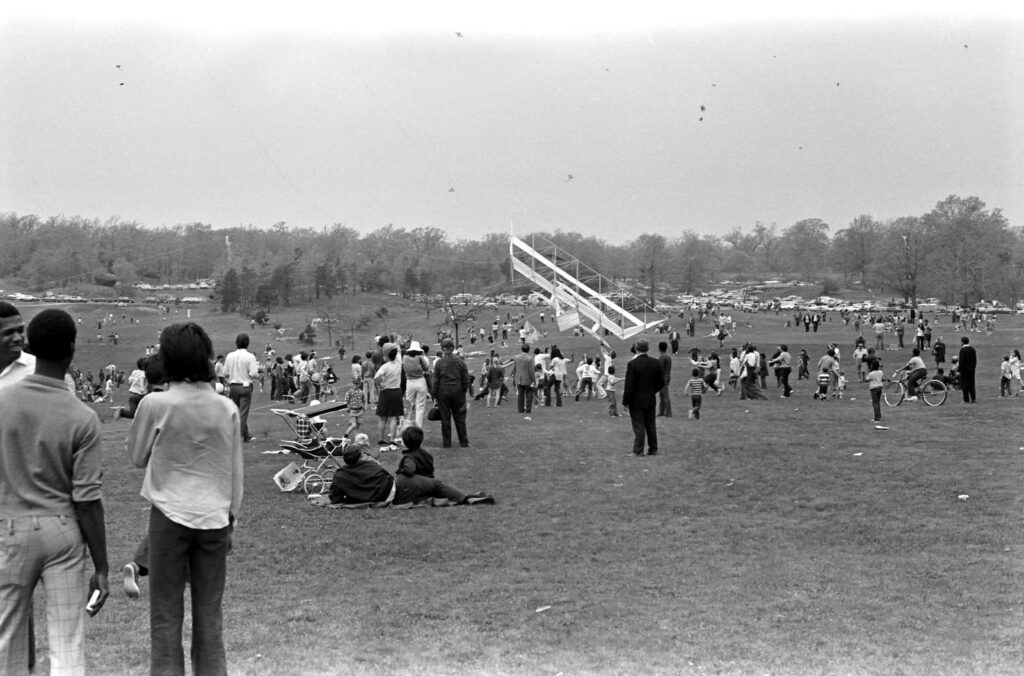 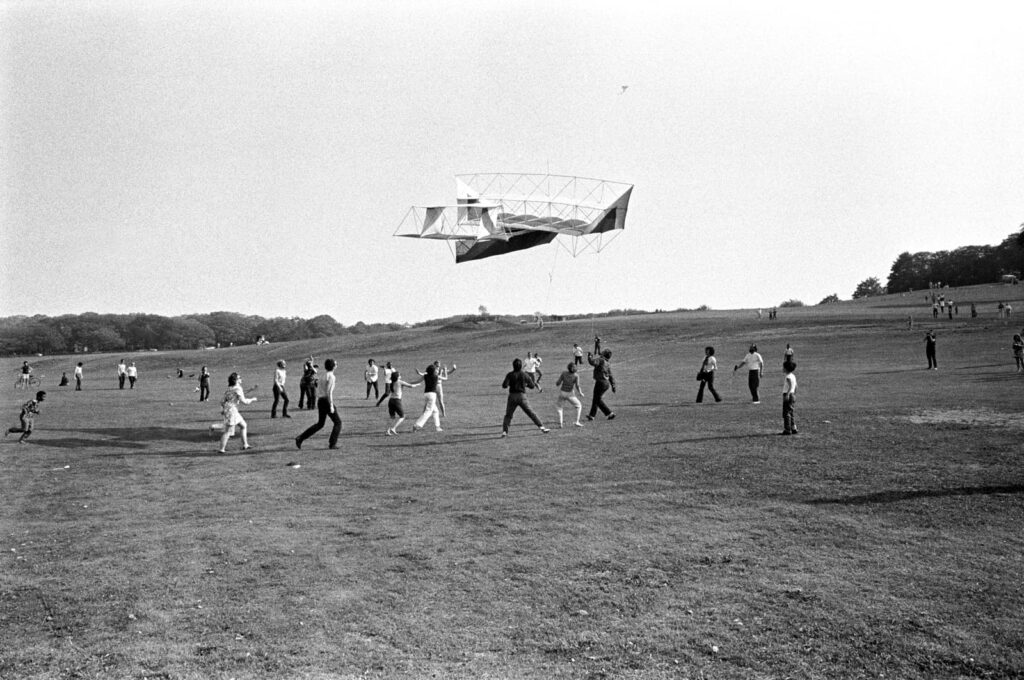 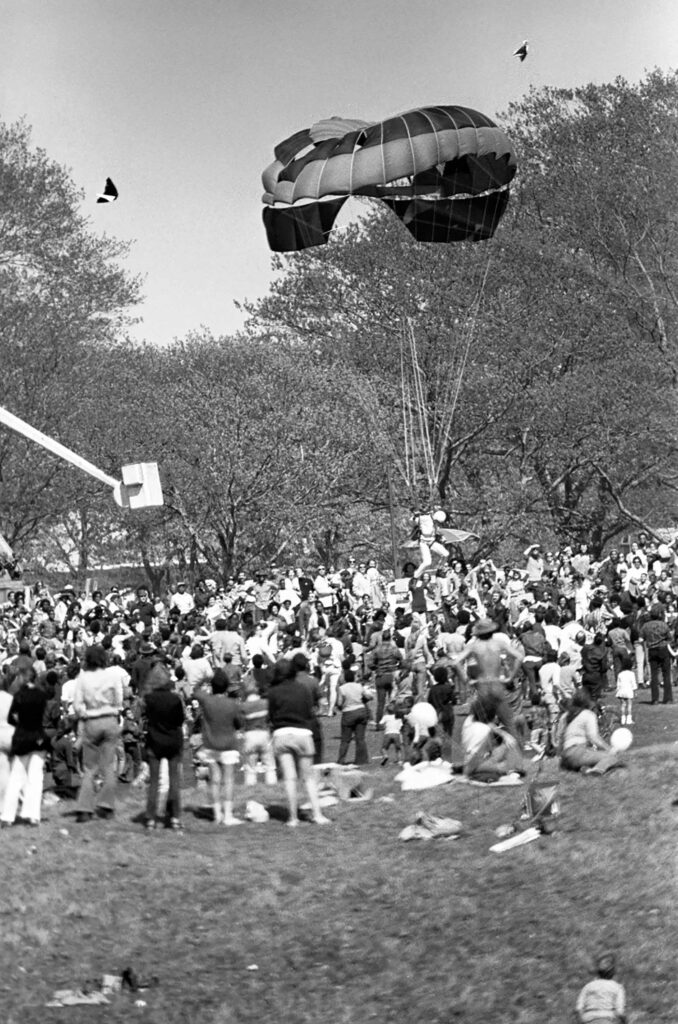 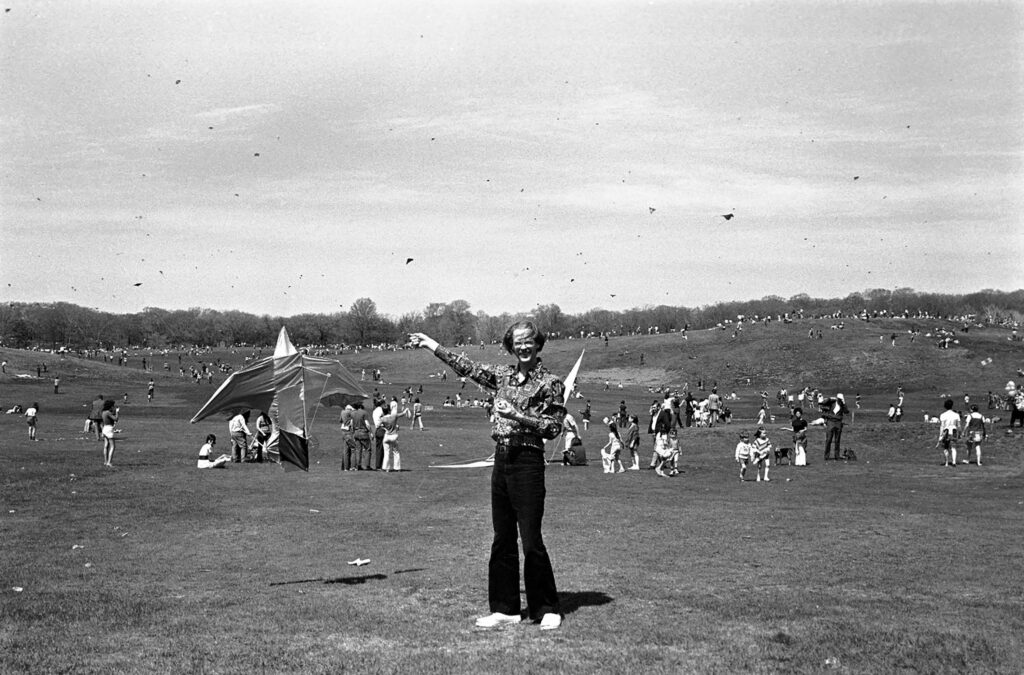 The Civil Rights movement, the Vietnam War, the Moon Landing, the assassinations of Martin Luther King, Jr. and Robert F. Kennedy, and, locally, the fight to desegregate Boston Schools and the Boston Redevelopment Authority’s approach to urban renewal revealed painful inequities and injustice in Boston and beyond. The kite festival didn’t solve these problems but it did create an opportunity for shared joy that was embraced by many. Here, a group of adults and children carry a very large kite in preparation for launching it at the 1970 Great Boston Kite Festival. Photo by Nick DeWolf, used by permission of the Nick DeWolf Photo Archive.

In the first year of the festival, a skydiver was tasked with judging the “highest flying kite.” Other judges went up in lift buckets, like the one at the edge of this photo, to get a good view of the proceedings. Photo by Nick DeWolf, used by permission of the Nick DeWolf Photo Archive.

During the 1971 Great Boston Kite Festival, the sky over Franklin Park was filled with kites of many shapes, sizes, materials and altitudes. Photo used by permission of the Nick Dewolf Photo Archive. 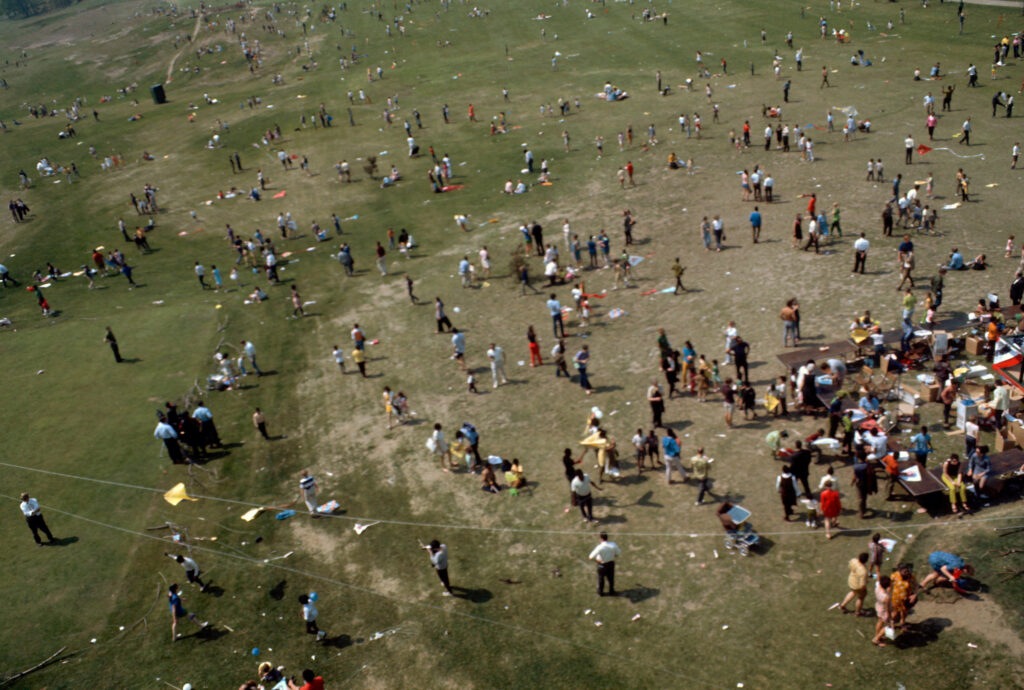 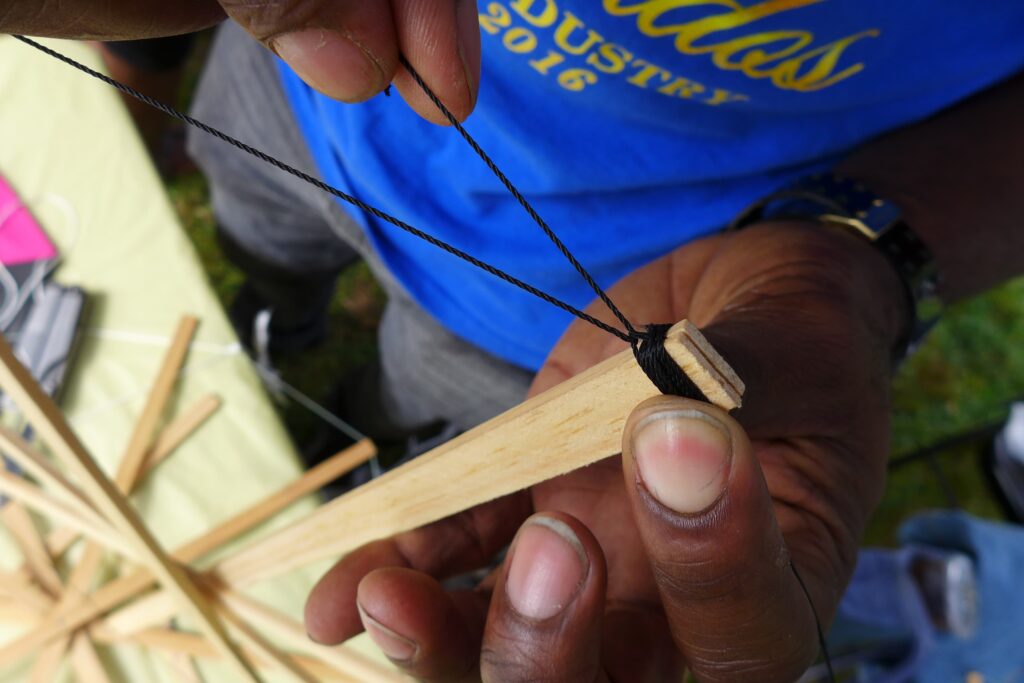 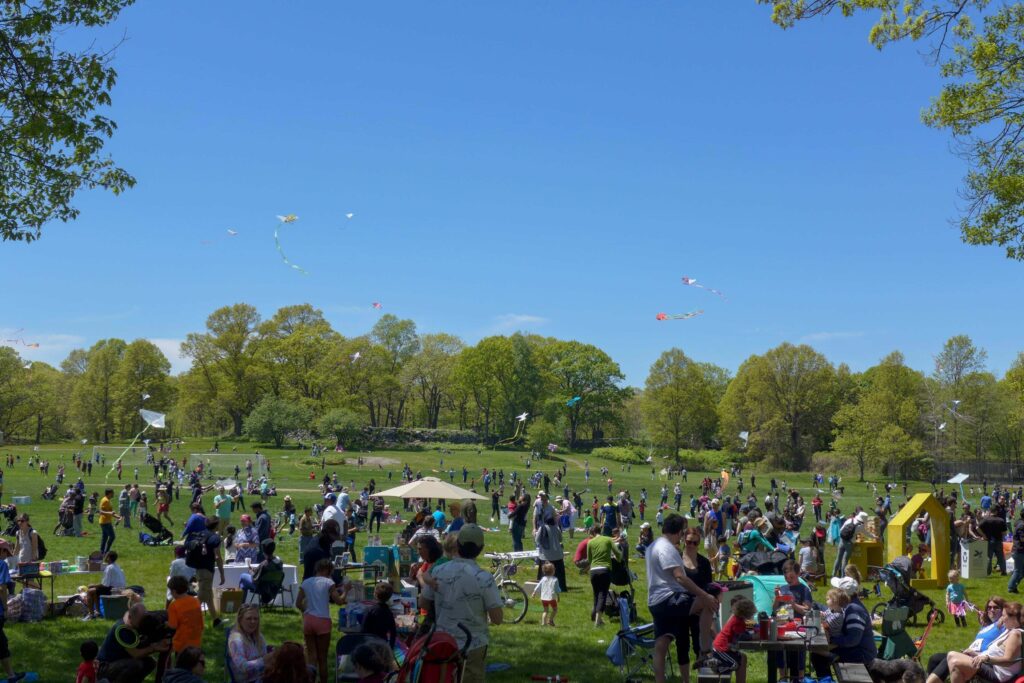 For the first decade of the festival, the William J. Devine Golf Course, a space within Franklin Park that has been reserved for a very different recreational purpose since 1896, hosted thousands of kite fliers for one day every year. Image courtesy of the Michael Sand Estate.

Franklin Park has been the site of other kite making events, too, such as this kite making demonstration by Jamal Burke at the 2019 Barbadian Festival Day. Photo by Darrah Bowden.

Part of what I admire about the Great Boston Kite Festival is that it brought so many people together in a time of intense racial and class division in Boston to share an experience based around the kite, which itself is part of many different cultures and traditions all around the world. But I cannot assume that all Bostonians experienced the event in the same way. In 2020, the murder of Ahmaud Arbery while jogging, the threat made to Christian Cooper’s life while birdwatching in Central Park and the rise in anti-Asian hate crimes reminded me to question my assumption‒as someone who has only experienced public space in a white body‒that parks and public spaces are welcoming places for all. While kite making and kite flying outdoors is free for anyone to enjoy, I hope, but can’t assume, that the experience is equally care-free for all.

This research was part of my practicum project for my MA in Critical Craft Studies at Warren Wilson College.

For further reading and to see more images of the Great Boston Kite Festival:

Explore the online archive devoted to the work of Michael Sand, an exhibition designer and member of the “Committee for the Better Use of Air,” as well as the archive of photographer and festival attendee Nick DeWolf. 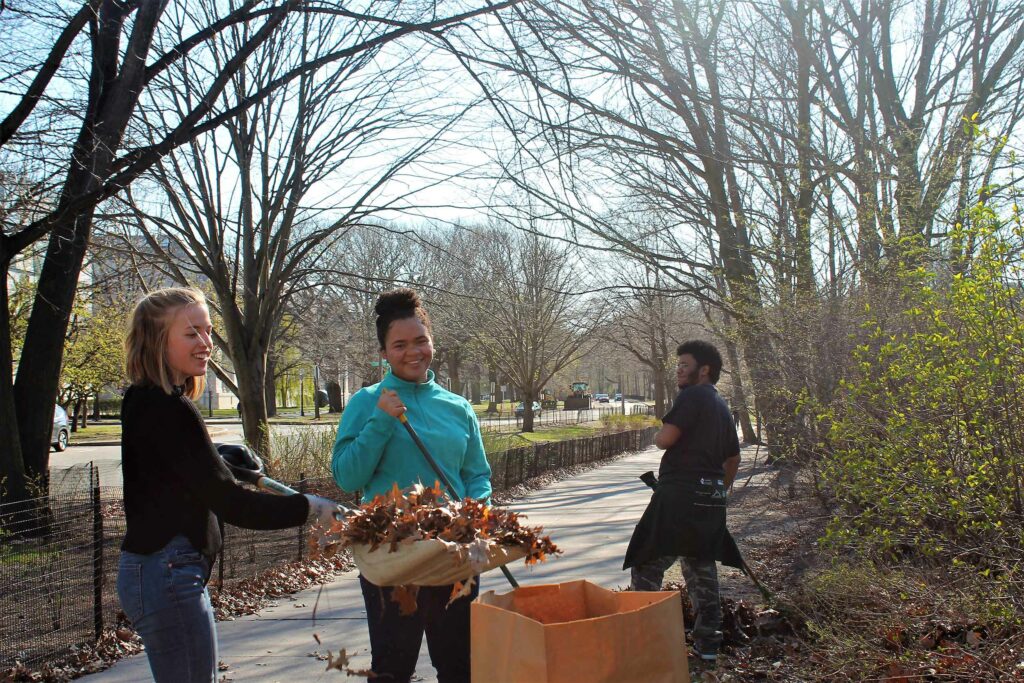 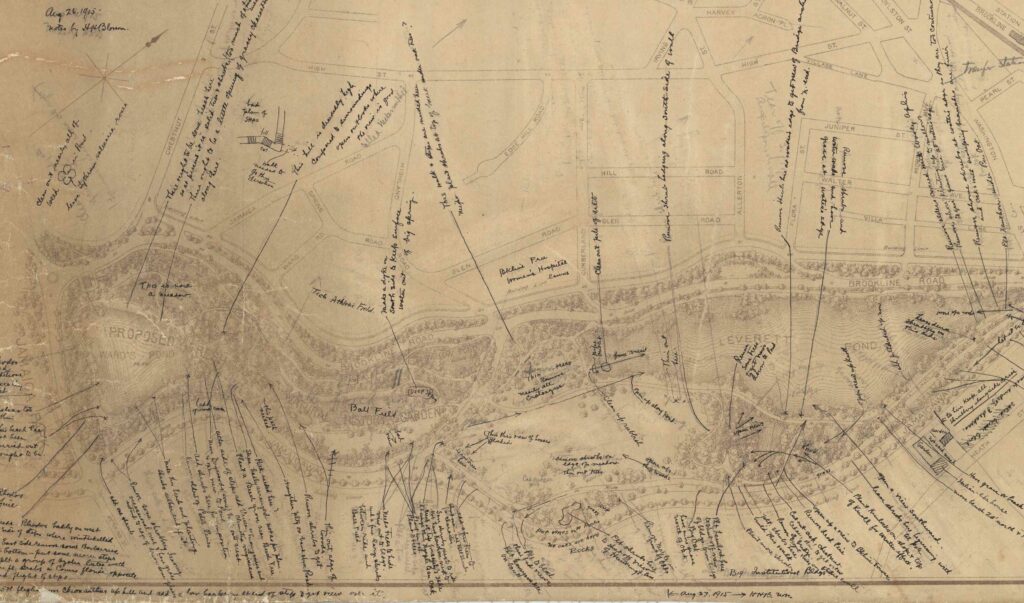