The Olmsted Bridges of the Back Bay Fens: Exceeding the Original Design Intention (3)

The Agassiz Road Bridge
Further west, the scenically important Agassiz Bridge features five semi-circular brick
archways that cross the two basins of the Muddy River and connect Park Drive with The
Fenway. As described by its architect, John C. Olmstead, the Agassiz Bridge was built in 1887 to
accommodate the waterway’s rising tides—again, a pragmatic aim—and to achieve aesthetic
impact: “Not being necessarily an imposing mass of masonry like Boylston Bridge, it was
designed in an ultra-picturesque style, almost suggesting the interesting effect of a partly ruined, but still standing and useful, ancient piece of comparatively unskilled masonwork” .21 With expectations thus lowered, the Bridge was constructed of Roxbury Puddingstone boulders taken from old boundary walls and field fences in nearby Franklin Park, itself undergoing renovation at the time. Exemplifying the principles of environmental reuse, local sourcing, and historic authenticity, Olmsted’s plan called for the boulders to be ordered in place and then precisely
reassembled at the Bridge site. As if to emphasize its conformity with the landscape, the Bridge
featured a central planting area and creeping vines in all the open crevices of its 10-feet-tall arches.

The “ultra-picturesque” aspect of the Agassiz Bridge was realized in the carved
walkways built to accommodate pedestrian viewing. Its “ruined…unskilled” character is belied
by the mechanized nature of the construction process, which required the installation of
temporary dams and precision dredging to calibrate the refilling of the channel. As well,
considerable attention was paid to landscaping, which is described in the Annual Report as being
conducted “under the immediate direction of the Assistant Landscape Gardener [and a] force of
gardeners and laborers…throughout the season…in the care of the plantations” .22 What is more, the name of the Agassiz Bridge and Road, which has engendered some debate among historians,
reflect a decidedly non-architectural intention. Whether it was named to honor ichthyologist and
anti-Darwinian Harvard University Professor Louis Agassiz or his socialite daughter Ida, who
was married to Boston Symphony Orchestra founder Henry Lee Higginson, the newly named
Bridge took on the stature of a monument to social and economic attainment. The City of Boston
likely encouraged the practice of naming bridges after wealthy benefactors; it conferred stature
in spite of the elemental materials chosen by the architects.

Conflict ensued with the Olmsted firm’s design for additional footbridges, each
specifying boulders. But botanist and unofficial advisor to the Boston Park Commission Charles
S. Sargent had other ideas. At his urging, architectural critic Mariana Van Rensselaer published
an editorial that voiced a dim view of the crude, unrefined boulder bridges of the Fens. Olmsted
aimed his response at Sargent, whom he saw as “the most obstinate and implacably ‘set’ old man
I have ever known” and predicted that the virtues of boulders—and his motivations in specifying
them—would be proven over time .23 The debate between “rusticity and urbanity” and the social
capital of its influencers, would be played out across the Fens and Boston’s parklands, impacting
successive landscape design. In the spirit of compromise, boulders were specified for smaller
footbridges and seam-faced granite for major ones .24 Cynthia Zaitzevsky wonders if the resulting
“furniture,” for all their tasteful unobtrusiveness, ultimately lack distinction.

In its simple charm and rustic structure, the Fens Bridge recreates the Agassiz Bridge’s
informal masonry, tactile, variegated Roxbury Puddingstone facing, and implanted vegetation. A
15-foot-long connector between The Fenway and Avenue Louis Pasteur, the Fens Bridge
highlighted the implications of a rising social elite in an area made newly attractive by the made
parklands that had been intended as democratizing environmental oases. By the late 19th
century, the Fens was becoming a destination address for Isabella Stewart Gardner’s Venetian palace,
Simmons College, Harvard Medical College, the Boston Museum of National History, not to
mention a home for the Bridge’s honorary namesake, Henry Lee Higginson. By the time of
Bridge construction in 1891, there was little pretense about the priorities of Boston Park
Department’s interest in what Kathy Poole terms “cultural patina” .25 In fact, Poole writes, the
goals of aesthetic sanitation had applied to people from the outset. She quotes John C. Olmsted
as reporting that the construction and “good occupation” of the Fens required the removal of 40
homes “of the cheapest kind” along with undesirable people described as coming “from the
marsh” .26 With the arrival of the Museum of Fine Arts in 1895, the Fens had become “a backdrop
for architecture” with an objectified, visual focus pleasing to Boston’s elite.

Today, as Fens Bridge stands as a central element linking Boston’s hospital and academic
institutions with a diverse residential community that is trying to maintain its identity in the face
of a mega-building boom surrounding Fenway Park. The Bridge’s rough, unpretentious quality
and low profile make it a popular photographic backdrop along a newly restored segment of the
Muddy River.

Here and throughout the parklands system, Olmsted’s vision has, like nature itself,
transformed. The stable wetlands that he planned have been problematic from the start. As
Cynthia Zaitzevsky points out, “…the tide- and flood-control system so carefully worked out by
Olmsted and the city engineer had been misused and overloaded. When the Charles River dam
was completed in 1910, the water flowing into the Fens from the Charles was fresh instead of
salt, thus rendering the entire design obsolete” (Zaitzevsky, 57). What is more, the ecosystem is
interrupted not only by the blight of invasive reeds but by a kind of “objectification”—war
memorials, a fenced rose garden, playing fields and playground—that contradicts Olmsted’s
intentions. “Today the Fens is a rather peculiar collection of spaces that appear to be connected
entirely by accident,” Poole maintains .27 Making the project design even more precarious is the
growing awareness that the urban wetlands’ spongy foundations will not withstand the impact of
climate change. A natural reclamation process is predicted for the near future.

Yet, the entire Fens sanitation and restoration project reflects a remarkable faith in the
naturalized urban city, with all its public health benefits, redemptive greenness, and artful
wildness. Olmsted’s conflicts with Boston’s bureaucrats and his insistence on incorporating
elemental aesthetics (especially boulders) into the made environment were not attacks on modern
industrialization. Olmsted embraced machinery that served his purposeful, integrative, and
naturalizing principles. He and his stepson created landscapes that were true to what he termed
“the genius of place,” based on the belief that every site has an inherent ecological and social
integrity .28 The job of the late 19th century landscape architect, he maintained, was to solve problems and “…let it alone more…never [do] too much”, both pragmatically and aesthetically.29 The counter impulses—to adapt and exceed the original intentions—reflect the resiliency of 29 Olmsted’s vision. The three major surviving bridges of the Fens link his ideals with the physical, environmental, and human priorities of his day and beyond. 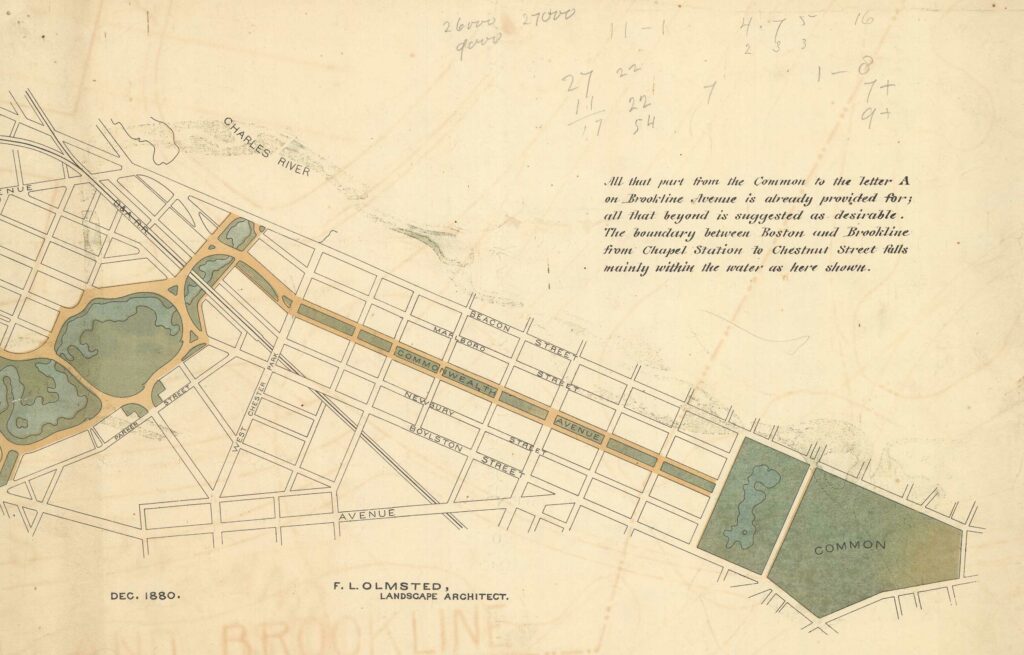 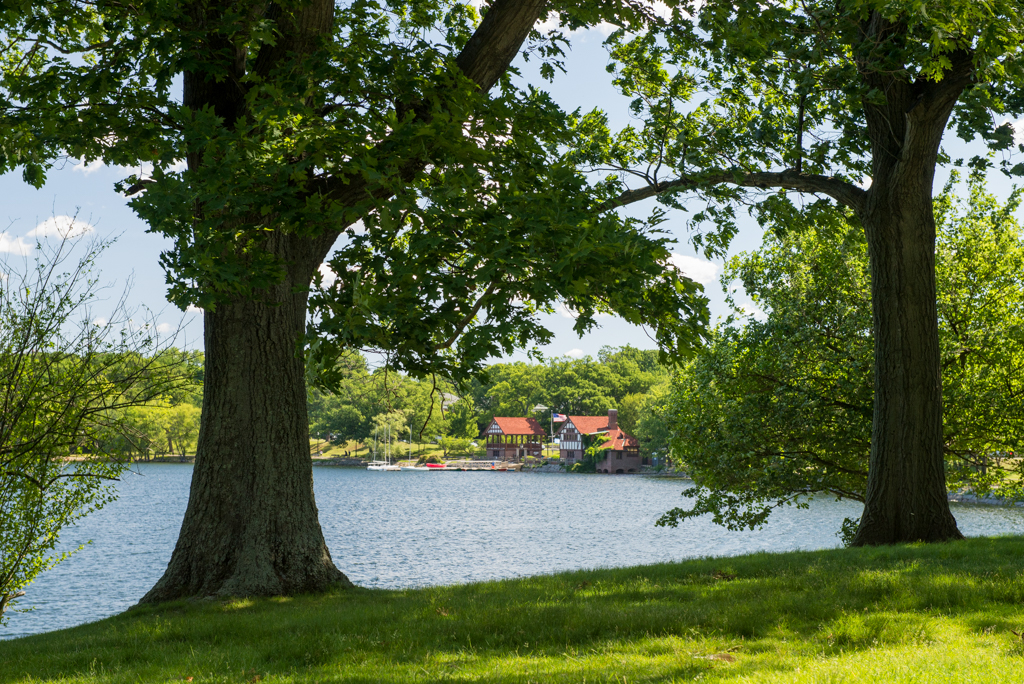