The Olmsted Bridges of the Back Bay Fens: Exceeding the Original Design Intention (1)

ABSTRACT
The Industrial Revolution was well entrenched by the late 1870s when the nation’s
preeminent landscape architectural firm undertook the quintessential machine vs. garden
challenge of creating a stable stormwater parkland out of a salt marsh basin that was seeping
sewage and debris. Echoing the cultural contradictions that had been articulated decades earlier
by Emerson, Thoreau, Twain, and others, Frederick Law Olmsted and his colleagues configured
Boston’s Back

Bay Fens to solve several urgencies of municipal infrastructure, but also to
reconcile—even tame—the overwhelming and detrimental intrusion of industrial artifice. Here
was an opportunity to shape a humane, healthful, and picturesque environment, a chance to
bridge a pastoral ideal with an urban reality. Three of the bridges that the Olmsted firm designed
as facets of the Emerald Necklace in the Fens reflect faith in the limitless potentials of the
“made” urban landscape. Olmsted insisted that the Boylston Street/Richardson Bridge, Agassiz
Road Bridge, and Fens/Higginson Circle Bridge would be decidedly architectural, as opposed to
engineering, structures. Yet, they have far exceeded their original intentions as
“necessary…strong but unobtrusive,” handsome, informal, and harmonizing furnishings. As
much as the celebrated “naturalized” city parklands that they spanned, the three Olmsted bridges
of the Back Bay Fens stand as monuments to the convergence of geographic, environmental,
cultural, and social priorities in the late 19th
century and beyond.

Introduction
The gracious Emerald Necklace parklands and languid Muddy River waterway that wind
and, to cite landscape architect Frederick Law Olmsted’s often-used verb, “meander” through
Brookline and Boston today give no evidence that the entire area was once comprised of
mudflats and wetlands. Seizing the momentum of 19th century industrialization and the era’s
eager appetite for erecting dams, basins, and causeways to provide tidal power to support new
mills and, in turn, build a competitive modern city, Boston went on an infrastructure binge. It
also simultaneously undertook concerted efforts to create and maintain green space parks, thus
ushering in a perpetual negotiation between industrial development and the made, “naturalized”
environment. The contradictions between pragmatic necessity and salutary outcome inspired
Frederick Law Olmsted and his firm in the design of the Back Bay Fens, a segment of parkland
initially intended to provide for some decidedly non-parkland priorities of its burgeoning city.
Yet, original design intentions aside, the Fens and three of its structural facets, the Boylston
Street/Richardson Bridge, Agassiz Road Bridge, and Fens/Higginson Circle Bridge, have stood
as harmonizing elements within the geographic, environmental, cultural, and social environment. Today, these bridges span many dimensions of unintended consequences.

Foul Boston, Fair Boston
Boston had its share of unintended disasters in its embrace of industrialization. The most
infamous project, the Boston & Roxbury Mill Dam, was the brainchild of real estate entrepreneur
and amateur engineer Uriah Cotting, who by 1818 had developed large parcels of the city’s
waterfront. Originally intended to stabilize tidal waters, catalyze a burgeoning hub of mill commerce, and reward investors with profits exceeding $520,000, the project was an abject failure in terms of cost and time overruns. Aside from two short-lived flour mills and a paint and dye factory, promises went unmet and the Mill Dam has gone down in history as Boston’s original engineering debacle, its first Big Dig. Most disastrously, the project’s faulty design resulted in sewage overflow, as the natural flushing action of the bay was hampered and the
porous land became a breeding ground for infectious diseases. In 1849, the Board of Health
proclaimed that the area had become “a nuisance, offensive and injurious to the large and
increasing population residing upon it”1 . If there is a silver lining to the failed Mill Dam project,
it would be that, once the land was filled (thanks to the era’s archetypal implements—the
railroad and steam shovel—creating land out of gravel and soil), the Industrial Age would stop at
the door of leafy, residential Back Bay.

Leafy aspirations for the entire city led to the establishment of Boston’s first municipal
park system, with duly appointed parks commissioners and 100 acres of purchased land and flats
in the Full Basin of the Back Bay in 1877. Over the next twenty years, the city secured sites for
19 parkways and playgrounds with the goal of beautifying the urban environment and making it
more livable for the swelling population of roughly 363,000 (a number that had risen 45 percent
over the decade). Financing challenges, including a low municipal tax rate, called for progressive
approaches, but flooding and sanitary crises demanded immediate remediation. Enter Frederick
Law Olmsted.

Flush with success for his highly articulated, urban park landscape designs in New York
City, Brooklyn, Chicago, and beyond, Olmsted, originally a student of scientific agriculture, was engaged as an advisor for the Boston Park Commission in 1878. When the city staged an open and anonymous competition for landscape design in Back Bay, Olmsted emphatically demurred
to climb into that “leaky boat”.2 He also declined to judge the submissions and must not have
been surprised when a local florist was initially named as the winning bidder. In 1879, Olmsted
and his stepson John Charles Olmsted were awarded the contract and their groundbreaking
“Proposed Improvements of Back Bay,” published the following year, was the result. (It was the
first segment of a 15-year effort that eventually encompassed plans for the entire Emerald
Necklace.) In turning to Olmsted, writes Allen Banks of the Frederick Law Olmsted National
Historic Site, “the city sought to combine a practical water/sewage control mechanism with a
piece of pleasing landscape design [within which] were state-of-the-art engineering mechanisms
regulating water and sewerage that…dredged, shaped, and planted…the area back to health” .3

Olmsted maintained far more grounded intentions: solving the sanitary problem with a
storage basin for the Stony Brook storm waters and restoring the salt marsh to its original
condition. This required new sewer construction, with the Muddy River and Stony Brook
diverted to the Charles River via conduits. To control flood waters, “Olmsted created a salt
creek, bordered by salt marshes, and enclosed by high banks. The banks were covered with
wildflowers, compact shrubs and vines, grasses, and trees that thrived on salt water,” according
to Boston Landmark Commission’s 1975 Back Bay Fens Report .4 This was a direct contradiction of the aims of Joseph Davis, then Boston’s City Engineer, who favored the even more utilitarian
solution: a formidable retaining wall and no plantings. But Olmsted and his stepson prevailed.
The Fens, designed a passive park ringed with walkways and a bridle path, would essentially be
a landscaped oasis, a minimalist greenspace serving functional aims. By adding the plantings and
creating a deliberate, ordered, and sustainable ecosystem along the river banks, however,
Olmsted’s propensity for incorporating larger concepts into “made” land was clearly evident.

4“Back Bay Fens.” Report of the Boston Landmarks Commission on the Potential Designation of
the Back Bay Fens as a Landmark under Chapter 772 of the Acts of 1975. City of Boston. 1983. Page 9 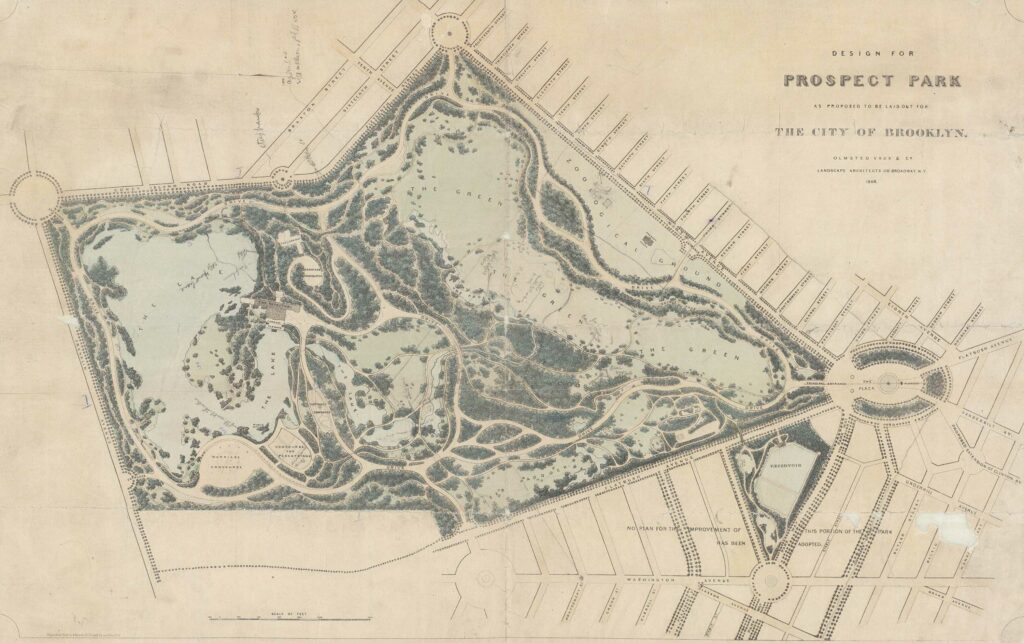 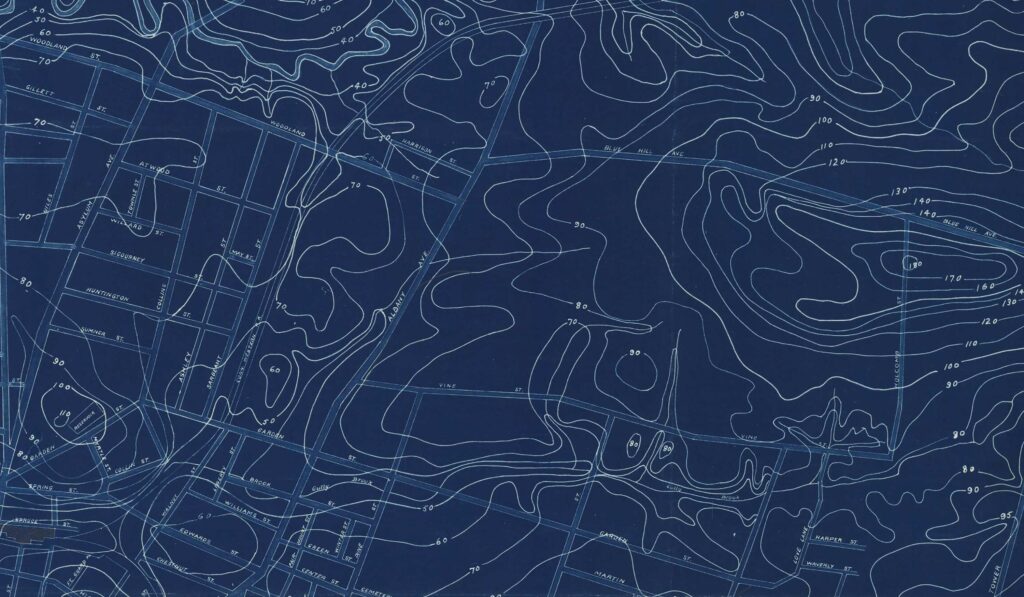 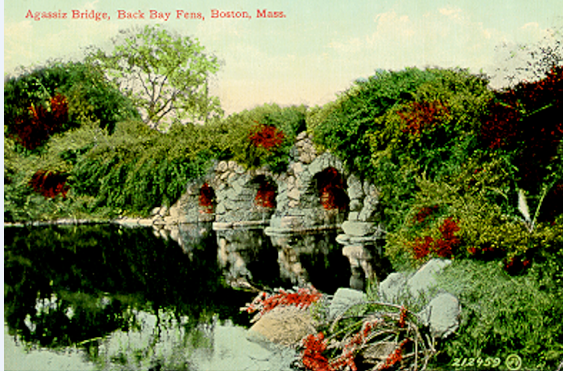